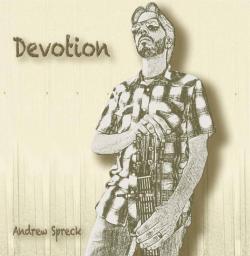 Andrew “keeps music live” by averaging 40 live shows a year—frequently accompanied by a percussionist—with 30+ original songs rotating throughout his performances and more songs than he can play in one sitting, Andrew’s set list changes with every show.

Spreck is in his 27th year as a performing musician. In 2011 he transitioned from lead guitarist/lead vocalist playing in rock & blues cover bands to blossom into an outstanding solo acoustic artist.

While his first solo cd of original music titled “In the distance” is reminiscent of his electric rock background, it also foreshadows the future with a handful of acoustic-driven songs. The follow-up “Devotion”, released mid-2014 is a true snapshot of the life he’s been living. Roughly half of the songs on Devotion were born directly from the solo acoustic experience.

In this electronic age of limitless personal jukeboxes, Andrew’s music is down-home, celebrating a simpler time when music was honest, earthy and came from the heart and soul.