Jonas Croyle Johnson practices the art of glass blowing, creating miniature marvels, in his garage studio in Forest Lake. Johnson’s work is showcased in the new exhibit “New Beginnings” at the Hallberg Center for the Arts in Wyoming. The show features artists who have become members of the Wyoming Area Creative Arts Community (WACAC) in the last year, and also celebrates the installation of several accessibility improvements to the new facility (the former location of Spirit & Praise Pentecostal Church), including new steps, a wheelchair ramp, an improved sidewalk, a paved handicap loading area and restroom enhancements.

The center was purchased last year, and the group has been around for a few years before the building was established.

Jonas is originally from Dawson, Minnesota, near the border of South Dakota.

“I quit drinking when I was out there, and it was a small town with nothing else out there,” he said. “I turned to hunting and then my hunting buddy moved out to Colorado. So I decided, I need to do something different.”

He moved to the Twin Cities, starting off in North St. Paul and then Maple Grove. His wife, Tree Croyle Johnson, is originally from Scandia, and inspired him to move to the area. Tree is also an artist, teaching at the Paint Pub in Maple Grove and creating mosaic artwork.

“She’s a big reason for me being involved in WACAC,” Jonas said. “That’s how I ended up on the board and a number of committees there.”

His wife was already involved in an art group in Wisconsin, but was looking for something closer to home. 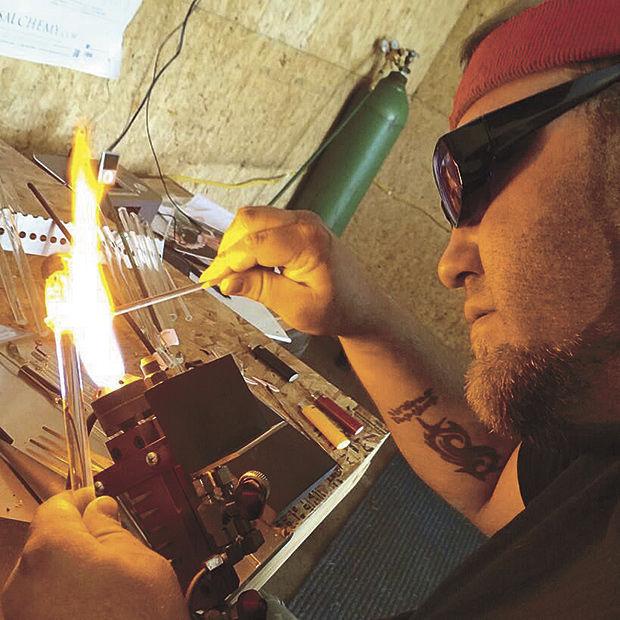 “She’d been trying to find something around here, a Forest Lake art group, so the Wyoming one came up and she decided to look into because she’s been pushing more to get other people involved rather than her own stuff,” Jonas said. “Part of it I think was to get me going, a little more motivated, which worked. That’s the best part about that group, is getting together and talking about stuff. It makes you want to go and do stuff.”

Before he moved to the Twin Cities, Jonas was in school for carpentry when he got a call from a friend who had gone to California to learn the skill of glassblowing. The friend arranged for Jonas to come and build some dorm rooms for the artist, and Jonas was able to go to California and see the creation of glass artwork firsthand while he worked on the job.

“So I just got to hang out and watch these guys work on stuff and I got to play with it a little bit, and it always kind of stuck in the back of my head,” he said. “It was just so awesome.”

“It was just to see if it was really as cool as I remembered,” he said. “Turns out it was. So then I went and bought all the stuff for it and jumped right in.”

Jonas bought a torch, loads of glass, and all of the necessary tools for crafting his own glass creations. So far Jonas has worked mainly with solid glass pieces, rather than hollow glass, which can be more tricky.

“I have not mastered that yet,” he said. “It’s harder to work with.”

The process of glassblowing is somewhat unpredictable, Jonas said.

“What I intend to do when I start is not normally what it ends up as,” he said. I” imagine that will come with a little more practice, but usually you get a fairly close idea and go with that. If you get into pendants or marbles or stuff like that, I can pretty much do whatever I want to do with that.”

Jonas works full time designing playgrounds at Wyoming-based company Xccent, which produces playground designs and outdoor fitness equipment. His glasswork so far is a hobby, but eventually he said he would like to explore creating sculptural works of art.

“Sculptural is really where I want to be,” he said. “I want to get to bigger things. I have plans to do a dragon. I’ve made a couple of dragons. I’m a fantasy nerd, and they’ve always struck me. I have to make it hollow, and that’s where I’m running into trouble. I’ve played with abstract art, but I just have a hard time with it because I don’t know what it is, so I don’t know what to call it or what to tell other people that it is.”

Jonas said he is inspired by the organic shapes of the natural world when he creates glass art. Many of the glass marbles he creates display colored flowers inside, and his items on display at the Hallberg Center include a glass bonsai tree and a glass flower. Having grown up on a farm, Jonas said that he often finds inspiration in living creatures and the natural world. He also enjoys tackling a variety of forms.

“I have a hard time doing the same thing,” he said. “I’ll see something that will just strike me, and I’ll want to try to do something similar to it.”

For Jonas, the process alone is often as rewarding as the end product.

“My favorite part is when you have two separate pieces of glass and you’re heating them up, and you can see there’s this edge where the two pieces are. Once it gets to a certain temperature all of a sudden it’s one piece. It’s just really cool; I love doing that part,” he said.

Find Jonas Croyle Johnson and his glass creations on his UncleGlass Facebook page, or visit his works in person at the Hallberg Center for the Arts (5521 Viking Blvd E., Wyoming,). The “New Beginnings” show will last through Aug. 27.