Songwriters in the Round Series #12

This was the 12th in a series of performances, introducing area songwriters to music lovers.

The Wyoming Area Creative Arts Community Songwriters in the round series continued on Jan 25, 2018. 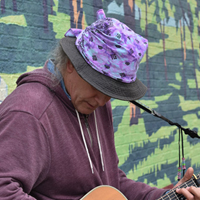 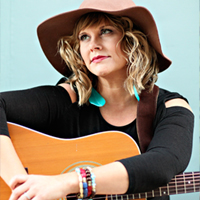 Vicky Emerson was raised in rural Wisconsin, has lived in New York City and San Francisco before relocating back to her roots in Minneapolis to raise her children. She has opened for songwriting luminaries such as Malcolm Holcombe and Gregory Alan Isakov, toured on a national basis and has mentored many songwriters on touring and career management.

Wake Me When the Wind Dies Down was released on 1/1/2016 and continues to garner critical acclaim on a local and national basis. The Minneapolis Star Tribune said, “Vicky Emerson has voice like a fallen angel that's as pretty as it is strong, and now she backs it up with growing lyrical depth and richly blue Americana arrangements on her third album, "Wake Me When the Wind Dies Down." The album reached #58 on the US Americana Charts and #5 on the European Americana Chart.

With the enthusiastic response from press and fans, Vicky is hitting the road with fellow Americana artist, Sarah Morris, as the duo The Home Fires. In 2017. 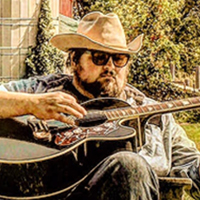 Zak "Poppa Bear" Norton is a 40 year old singer songwriter born and raised in Minnesota. He started writing songs when he was 16 because he was too lazy to learn tablature or cover songs and not knowing any better simply assumed it was easier to write his own songs. Over his 24 years of writing he has had many musical influences over many genres and never tries to hide them, but no matter what he always comes back to his big 4. John Prine, Willie Nelson, John Denver and Buck Owens. Each one is different yet they all possess sincerity, humor, sorrow and humility in their music and they are all great story tellers. Zak is currently a member of the Midwest Country Music Association and recently released his second record "American Daredevil Country" with his Daredevil Country Duo "Poppa Bear Norton"

Songwriters in the Round Series #11

This was the 11th in a series of performances, introducing area songwriters to music lovers.

This 11th in the series of performances brought artists from throughout Minnesota, and featured these talented singer/song writers:

Together for the first time, all performed their original works for the public.

This event is FREE and OPEN TO THE PUBLIC

The Wyoming Area Creative Arts Community Songwriters in the round series continued on Nov 9, 2017.

Ben Cook-Feltz- Iowa-raised, Minneapolis-based Ben Cook-Feltz is a singer, songwriter, drummer and self-taught pianist.  Combining observational, sometimes quirky lyrics with melodies that hearken back to the classic sounds of the 60′s and 70′s, he has been entertaining audiences throughout the Midwest as a dynamic performer, whether playing solo, with his crackerjack band, or backing up some of the finest regional talent.  His most recent record, She Doesn't Believe Me, was released in October 2015.

Dave Cofell was raised in charming Collegeville, MN where he began baritone ukulele lessons at the age of 7. As soon as Dave's fingers were long enough, he moved up to a full-size guitar and started writing his own songs. Dave graduated from St. John's University with a degree in Fine Arts. Dave has been voted “The Best Original Musician in Central Minnesota” 4 years in a row (Gannett), performs more than 200 shows a year and tours both nationally and internationally. Dave has three full-length albums of original music available on CD and is currently working on his fourth. His third CD titled, “A Thousand Shades of Blue” was released in 2016.

Oliver Nollet has been writing and performing since the age of 8. He started out performing with his dad. He grew up on folk and indie music as well as his dad’s writing. He attends a performing arts school in St. Paul for theatre and playwriting where he has developed a strong relationship with poetry, words and writing. Oliver plays guitar, piano, and ukulele. Look for his EP titled “Summer Boy” on soundcloud.

Songwriters in the Round Series #10

This is the 10th in a series of performances, introducing area songwriters to music lovers.

This 10th in the series of performances will bring artists from throughout Minnesota, and feature these talented singer/song writers:

Together for the first time, all will be performing their original works for the public.

This event is FREE and OPEN TO THE PUBLIC

Sarah Morris.  Over the last five years, Americana singer-songwriter Sarah Morris has earned a reputation for engaging performances, with a voice both clear and lush. From a young age, she immersed herself in her parent’s eclectic record collection before finally falling in love with the storytelling and songcraft in country music.  Spending a few years in Music City instilled a traditional songwriting sensibility that has earned her latest album Ordinary Things international airplay, critical acclaim, and has propelled her into the national spotlight.

Nashville influenced singer-songwriter Matthew French’s music and lyrics catch at the strings of hope hidden within heartache. Guitar in hand, coffee cup nearby; the melody transports and the words tell a story. Our story. A human story. Matthew’s audiences feel themselves reflected in the warmth of his voice. Not strangers, just unmet friends.

Doug Collins who is originally from rural Iowa, has been called "one of the most brilliant songwriters to emerge from the Twin Cities in nearly two decades" by southernminn.com. His last CD, “Complicated Compliments” was voted one of the best of the year in the Mpls Star Tribune. Doug performs both solo and with his band the Receptionists.